Born in Toyko. Studied at school of Hakubakai and with Nakamura Fusetsu and Kurata Hakuyo at school of Taiheiyogakai. Worked in advertising department of the Ajinomoto company in 1910. Print dated 1916 published by “Sketch Club.” Traveled in Manchuria and Korea, settling into a job with a Korean newspaper in Seoul until 1920. From 1920 exhibited with Teiten, Nitten, and Taiheiyogakai. In mid-1920s designed scenery prints and bijin-ga published by Kato Junji and Sakai-Kawaguchi. Traveled in Europe 1930. Between 1937 and 1940 contributed frequently to Karikare, a satirical print magazine, and served as artist for the army. After World War II helped establish the Japan Mountain-Woods Art Society (Nihon Sanrin Bijutsu Kyokai) and painted 30 views of national parks.** Taken in whole, or in part, with permission from: Merritt, Helen and Nanako Yamada. Guide to Modern Japanese Woodblock Prints: 1900-1975. University of Hawaii Press: Honolulu. 1992. 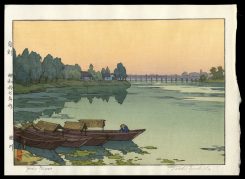