Born in Kofu, Yamanashi prefecture. Spent childhood in Korea and Manchuria where his father held various government jobs. Returned to Japan 1929. Studied with Hiratsuka Un’ichi in the extracurricular course at Tokyo School of Fine Arts; graduated in 1938. Worked as foreman in charge of quality control at Takamizawa Mokuhansha. Immediately after World War II he spent 3 years in bed with tuberculosis. During that time began making creative prints. His first show at the Yoseido gallery in 1956 was of figurative prints. This was followed by other figurative prints including a Greek mythology series in 1965, but his most widely acclaimed works are abstractions which he began producing in 1958. Member of Nihon Hanga Kyokai from 1958. Received awards at several international competitions including the second and fifth Tokyo biennales, Krakow, Ljubljana, Banska, and Lugano. In 1967 taught at University of Oregon. In his abstractions he visualizes ideas and then carves directly and spontaneously without preliminary sketches. Achieves a sensual and richly evocative quality by printing on back of the paper to enrich the image on the front.** Taken in whole, or in part, with permission from: Merritt, Helen and Nanako Yamada. Guide to Modern Japanese Woodblock Prints: 1900-1975. University of Hawaii Press: Honolulu. 1992. 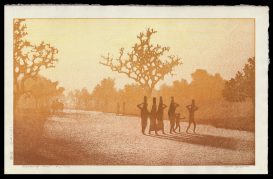 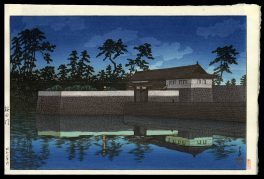