Born in Tokyo. Given name Mankichi. Son of Japanese-style painter and lithographer Ishii Teiko. Elder brother of Ishii Tsuruzo. First studied Western-style painting with Asahi Chu; then, after Asahi Chu, went to Europe with Nakamura Fusetsu. Beginning in 1904, he studied with Fujishima Takeji at Tokyo School of Fine Arts. Before going to Paris in 1910 Hakutei was very active in sosaku-hanga movement. As an editor of the magazine Myojo, he was responsible for publication of Yamamoto Kanae’s landmark Fisherman in 1904. Participated in publication of Heitan and served as editor for many issues of Hosun, often designing woodcuts or making lithographs for the magazine. Designed 9 prints in a proposed set of bijin-ga entitled Twelve Views of Tokyo (Tokyo junikei) 1910-1916, carved by Igami Bonkotsu. Hakutei self-carved and self-printed Kiba, depicting a famous floating lumber yard, in 1914 shortly after his return from Paris. Otherwise he depended upon professional carvers and printers. In 1917-1918 contributed 3 sets of 5 prints each to Japan Scenery Prints (Nihon fukei hanga). Became associate member of Nihon Hanga Kyokai in 1939; by then he was a well-known painter exhibiting with Shin Bunten and a member of Imperial Art Academy. Active in forming several organizations including Japan Watercolor Society (Nihon Suisaigakai) in 1913, Nikakai in 1914, and Issuikai in 1936.** Taken in whole, or in part, with permission from: Merritt, Helen and Nanako Yamada. Guide to Modern Japanese Woodblock Prints: 1900-1975. University of Hawaii Press: Honolulu. 1992. 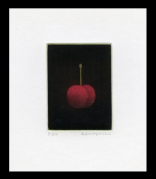 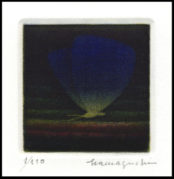