Born in Yokohama. Graduated from Meiji University; then studied painting with Fujishima Takeji, Okada Saburosuke, and Kuroda Seiki. Actively participated with Nagase Yoshio and Hiroshima Shintaro in producing moku-hanga for Kamen in 1913 and organizing Nihon Hanga Club and Kamen exhibition in 1916. In 1918 went to France; remained there for the rest of his life and distinguished himself as an etcher. Maintaining close ties with his friends in Japan, he retained membership in Shun’yokai and Nihon Hanga Kyokai and regularly sent prints to exhibitions. Was influential in urging the uniting of Yofu Hangakai and Nihon Sosaku-Hanga Kyokai into Nihon Hanga Kyokai in 1931 in order to make one strong association to represent modern printmakers for the first exhibition of sosaku-hanga in Paris in 1934. Arranged for that show and wrote the catalog. In 1936 awarded Legion of Honor by the French government.** Taken in whole, or in part, with permission from: Merritt, Helen and Nanako Yamada. Guide to Modern Japanese Woodblock Prints: 1900-1975. University of Hawaii Press: Honolulu. 1992. 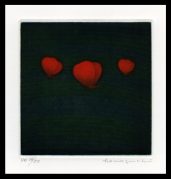