Born in Mashiko, Tochigi prefecture. Graduated in 1927 from Aoyama Normal School. Worked as a teacher until 1945. Close friend of Hamada Shoji. Studied independently with Hiratsuka Un’ichi in 1935 and Munakata Shiko in 1936. He is as masterful as his teachers in controlling the interplay of black and white to create a stark, scintillating effect. Exhibited with Shun’yokai and Kokugakai in 1930s. Member of Nihon Hanga Kyokai 1948-1952. Founding member of Banga-in 1952. Reinstated in Nihon Hanga Kyokai in 1958 but withdrew again in 1960. Joined Nippankai. Many solo exhibitions and represented in Tokyo Biennale 1957-1966 and Sao Paulo Biennale 1967. After 1962 worked only on religious subjects. Style involves deep embossing by forcing damp paper into the grooves of a carved woodblock under pressure on an etching press and then applying ink by tampons on the raised surface. Sometimes uses first character of family name printed in red as a seal.** Taken in whole, or in part, with permission from: Merritt, Helen and Nanako Yamada. Guide to Modern Japanese Woodblock Prints: 1900-1975. University of Hawaii Press: Honolulu. 1992. 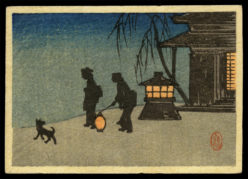 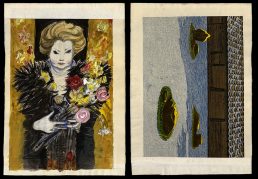