Born in Chigasaki, Kanagawa prefecture. Original name Mitsui Gen. Grandson of Nakazawa Hiromitsu. Graduated from Fuji Junior College. Began producing self-carved and self-printed kabuki actor prints in 1978. These were not favorably received at first, but thanks to the patronage and encouragement of Nagayama Takeomi, president of the Shochiku Company which manages the Kabuki-za in Tokyo, Kokei was able to continue making prints until he won public recognition. Makes about one print a month of an actor appearing at Kabuki-za; destroys each block after initial edition of fewer than 75 prints. All actor prints are sold in series at Kabuki-za. Designs inspired by Sharaku but also highly individual and often humorous. All are printed on very thin ganpi paper. Subjects, other than actors, include flowers and a series on eight kinds of hell. Sometimes signs Kokei in kanji with or without a seal; sometimes includes an additional seal indicating number of prints in the edition and writes the print’s number over the seal.** Taken in whole, or in part, with permission from: Merritt, Helen and Nanako Yamada. Guide to Modern Japanese Woodblock Prints: 1900-1975. University of Hawaii Press: Honolulu. 1992. 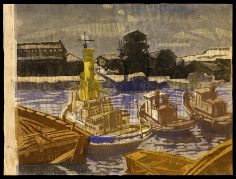 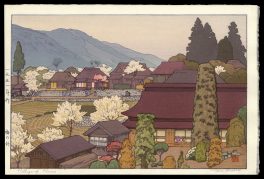