N. Utagawa (originally Igusa) Kuniyoshi. F.N.: Magosaburo, Taroemon. Go: Chooro, Ichiyusai, Ryuen. Ukiyo-e painter, printmaker. Worked in Edo. Trained first to the family craft of dyer; then, probably, a pupil of Katsukawa Shun’ei. When still a youth, was accepted as a pupil by Utagawa Toyokuni and began to use go of Ichiyusai Kuniyoshi and Chooro. Studied Tosa, Kano, and Maruyama painting; influenced by Utagawa Kuninao. Then founded his own style, one so popular that it is said the young men of his time often asked him to tattoo his designs on their bodies. Famous for his prints of actors and animals; also specialized, with invention and gusto, in illustrations of heroic episodes in Japanese history (produced an excellent series on the life of Nichiren); the best of his few landscapes equal those of Hiroshige. Had a taste for the bizarre, the fantastic, the ghoulish. His early style was comparatively simple, with landscape backgrounds in the manner of Hiroshige; later his work became increasingly complex. Occasionally influenced by European models. A most prolific and very uneven artist. Taken in whole, or in part from: Roberts, Laurance P. A Dictionary of Japanese Artists: Painting, Sculpture, Ceramics, Prints, Lacquer. Weatherhill, Inc: New York. 1986. 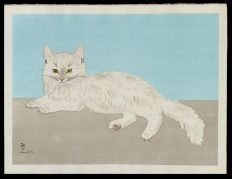 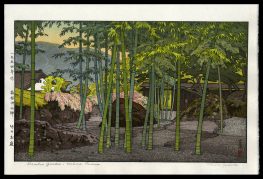