N.: Kawanabe Nobuyuki. F.N. Shusaburo; later, Toiku. Go: Baiga, Baiga Dojin, Baiga Kyosha, Chikamaro, Gaki, Hata Kyosha, Kyosai (Gyosai), Kyosha Gaishi, Nyoku (Joku) Nyudo, Raisui, Shoshoan (Seiseian), Shosho Kyosai, Shoshosai (Seiseisai), Shuransai, Suiraibo. Kano painter, printmaker, illustrator. Born in Shimosa Province, son of a samurai. Studied as a child under Utagawa Kuniyoshi; then in Tokyo under Maemura Towa and, later, Kano Tohaku Chinshin, who gave him the name of Toiku when he was 19, and was admitted to the Kano house. Separated from the school at 27, becoming an independent painter and settling in the Hongo area of Tokyo. Loved sake, as is shown by his go Shuransai, and is said to have done some of his best work under its influence. Exhibited at the Vienna International Exposition in 1873 and at that of Paris in 1883. His distinguished painting, largely in late-Kano manner, includes some excellent bird studies and is often marked by a wild, eccentric humor. Left many lively sketches of great dexterity of draftsmanship and copies of works by other artists. Also made a few prints, many of which are of ravens, in a bold simple style, and caricatures full of fantasy and invention. His illustrated books include Kyosai Gaden, Kyosai Gafu, and Kyosai Manga. Taken in whole, or in part from: Roberts, Laurance P. A Dictionary of Japanese Artists: Painting, Sculpture, Ceramics, Prints, Lacquer. Weatherhill, Inc: New York. 1986. 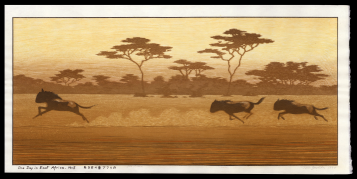 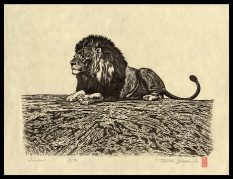 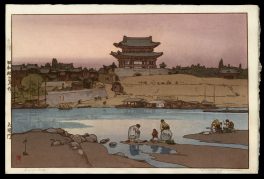