Born in Kumamoto prefecture. Graduated in 1960 from Tokyo University of Arts; completed graduate program 1965. Member of Nihon Hanga Kyokai 1969-1971. In 1969 traveled for 8 months around the world. From 1977 taught at Tokyo University of Arts. Exhibited widely in Japan and at international competitive biennales including Tokyo in 1968 and 1976, Krakow in 1970 and 1974, Norway in 1974 and 1978, Frechen, 1976, and Ljubljana in 1977. Among his works are prints as a pictorial diary with images often derived from his travels or the daily activities of his family. Each of these works in mixed media describes a moment in Noda’s life, with the date and usually the place as the title. His method has involved enlarged mimeographed photographs reproduced through an electrically scanned stencil and applied with silkscreen over a woodblock-printed background.** Taken in whole, or in part from: Blakemore, Frances. Who’s Who in Modern Japanese Prints. Weatherhill, Inc: New York. 1983. Merritt, Helen and Nanako Yamada. Guide to Modern Japanese Woodblock Prints: 1900-1975. University of Hawaii Press: Honolulu. 1992. 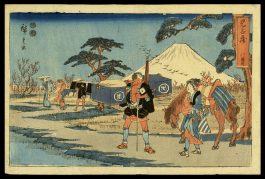 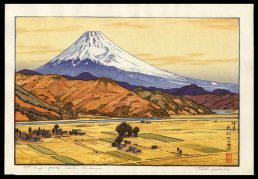