Born in Kanazawa. Given name Tomitaro. Studied with Inano Toshitsune. From 1901 an illustrator for an Osaka newspaper. From 1910 exhibited paintings with Bunten and from 1914 with Inten; became member of Saiko Nihon Bijutsuin in 1917. In 1918 created and probably self-published Spring and Fall in the Pleasure Quarter (Kuruwa no shunju), a set of 4 prints, one for each season. Contributed to New Ukiyo-e Beauties, 1924. Established Hakuyosha (White Radiance Company), a combined school and publishing house. Taught many children. Became leader in Osaka art circles. Provided mokuhan covers for the satirical magazine Dai Osaka in 1920s. Designed okubi-e prints of bijin-ga with rich mica backgrounds. On Heron Maid, 1925, the carver and printer are noted respectively as Matsuno and Yamane.** Taken in whole, or in part, with permission from: Merritt, Helen and Nanako Yamada. Guide to Modern Japanese Woodblock Prints: 1900-1975. University of Hawaii Press: Honolulu. 1992. 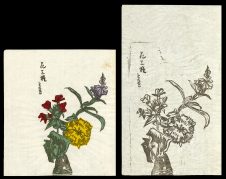 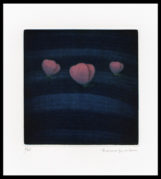 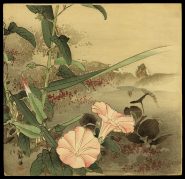