Watanabe is a Christian print artist whose subjects are invariably drawn from his religious training. His techniques, however, derive from Japanese folk traditions, never revealing the slightest Western influence in terms of illustration or design. The folk-art movement in Japan began in the 1930s as an attempt to keep alive various traditional arts, among them stencil printing. Watanabe was an early member of a rather small but important group of artists who dedicated themselves to learning and preserving these arts, and it is largely because of their work that the techniques have survived. Watanabe’s naïve interpretations evoke sincerity, but to the Westerner have charm and quiet humor as well. Only Watanabe would show the Last Supper with Japanese food on Japanese plates and the disciples seated without chairs—or the Widow’s Mite as an ancient Oriental coin with a square hole. The long faces seen here are expressionless, yet the prints exude cheer and a gaiety seldom seen in religious art by Western artists. Watanabe’s biblical prints are appreciated by people of all denominations. They are said to be present in the Vatican and were hung in the White House during one recent administration. People of the Jewish faith value his treatment of Old Testament subjects. Taken in whole, or in part from: Blakemore, Frances. Who’s Who in Modern Japanese Prints. Weatherhill, Inc: New York. 1983. 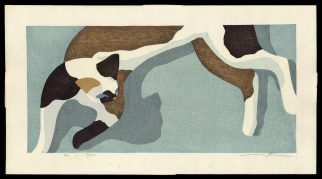 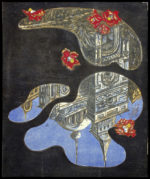