Born in Lima Peru in 1950, Brian Williams has spent the last 30 years living in Japan. He studied art at the University of California, Santa Barbara. He has since become an avid world traveler and environmental activist in addition to an artist. Brian works in a variety of media, including watercolor and gouache paints as well as lithograph and intaglio printing. He has had over 100 solo exhibitions throughout the United States and Japan. The British Museum, the Art Gallery of New South Wales, LA County Art Museum, The Cleveland Museum of Art, the Cincinnati Art Museum, Kyoto University, and various corporate collections all house works by Brian Williams. Brian has appeared on Japanese TV, both NHK and private broadcasters, and was also featured on Charles Kuralt’s CBS program, Sunday Morning. Taken in whole, or in part, with permission from: Merritt, Helen and Nanako Yamada. Guide to Modern Japanese Woodblock Prints: 1900-1975. University of Hawaii Press: Honolulu. 1992. 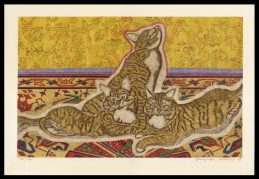