Born in Shizuoka prefecture; moved to Tokyo at an early age. Given name Gengo. First sought information on moku-hanga technique from Fujimori Shizuo when both men were in Taiwan. Later he studied with Onchi Koshiro. Employed various materials for printing nonobjective compositions as Onchi did. Exhibited with Nihon Hanga Kyokai from mid-1930s; member from 1943. Contributed to every set of Ichimokushu. Exhibited with Kokugakai. Represented at Grenchen and awarded major prizes at Ljubljana in 1956 and Lugano in 1958. Abstract prints strongly influenced by Onchi. Sometimes used the name Gen in roman script as a signature.** Taken in whole, or in part, with permission from: Merritt, Helen and Nanako Yamada. Guide to Modern Japanese Woodblock Prints: 1900-1975. University of Hawaii Press: Honolulu. 1992. 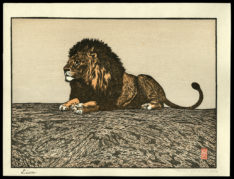