Lived in Kyoto. A late member of Utagawa School; taught by his father, Nomura Yoshikuni (Yoshikuni III), 1855-1903, and his grandfather. His great-grandfather, Yoshikuni I, was a pupil of Kuniyoshi. Yoshimitsu also studied panoramic scenery painting with a French painter who had come to Kyoto in 1891. Yoshimitsu established his own school at an early age. Became known for his panoramic views of the war in Satsuma and the attack on Port Arthur during Sino-Japanese War. Also noted for making the scenic backdrop for more than 20 years for annual cherry blossom dance pageant in Kyoto known as the Miyako Odori. Famous Places Around Kyoto (Kyoraku meisho), a set of 6 prints, was published in an edition of 200 in 1931 by Sato Shotaro. Also reported to have designed actor prints. Prints introduced in the U.S. through Toledo Exhibition in 1936.** Taken in whole, or in part, with permission from: Merritt, Helen and Nanako Yamada. Guide to Modern Japanese Woodblock Prints: 1900-1975. University of Hawaii Press: Honolulu. 1992. 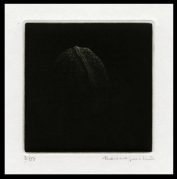 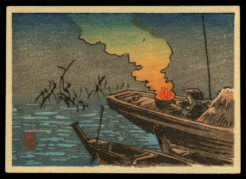 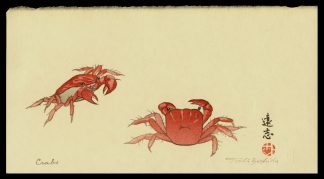