Born in Toyko. Given name Bunjiro. Studied as a boy with Aoyagi Bokusen and Araki Kan’yu and as an adult with Okada Saburosuke and Kaburagi Kiyokata. Exhibited Japanese-style paintings with Ugokai and Kyodokai. Inspired by Ito Shinsui’s Eight Views of Lake Biwa, which he saw at a Kyodokai exhibition. Sought affiliation with Watanabe Shozaburo by preparing sketches for prints resulting in initial prints of 4 scenes of Shiobara Hot Springs in 1918 and ultimately a lifetime of collaboration. Watanabe published over 100 prints designed by Hasui between 1918 and the 1923 earthquake, among them 2 series entitled Souvenirs of Travel (Tabi miyage), 1919 and 1923, and Twelve Tokyo Subjects (Tokyo juni dai), 1919. During this period Hasui was also commissioned to design 8 prints of the villa and garden of Baron Iwasaki Koyota; the prints were used as souvenirs for the baron’s guests. The blocks for all of these were lost in the fires following the 1923 earthquake. Hasui went on to design more than 600 landscapes, working up to the time of his death. Most were published by Watanabe Shozaburo. Kawase also worked with other publishers including Kawaguchi in 1929, Doi Teikichi in 1931, Iida in 1932, and Shiota Takezo in 1935. In 1953 the Committee for Preservation of Intangible Cultural Treasures, in recognition of the collaborative techniques involved in producing shin-hanga, commissioned Hasui to create a new print entitled Snow at Zojoji Temple with assistance from artisans. The process was carefully documented by Narazaki Muneshige. Hasui was named a Living National Treasure in 1956. Various seals used before the earthquake; usually a small red circular seal with three teardrop strokes afterward.** Taken in whole, or in part, with permission from: Merritt, Helen and Nanako Yamada. Guide to Modern Japanese Woodblock Prints: 1900-1975. University of Hawaii Press: Honolulu. 1992. 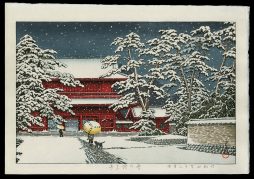