Born in Asakusa district of Toyko. Original name Takahashi Katsutaro; used the art name Shotei 1907-1922, Hiroaki or Komei after 1922. Studied Japanese-style painting with his uncle Matsumoto Fuko. In 1891 with Terazaki Kogyo organized Japan Youth Painting Society (Nihon Seinen Kaiga Kyokai). Illustrated textbooks and newspaper novels. Began designing woodblocks for Watanabe Shozaburo for export in 1907 and produced about 500 prints before September 1923. The blocks for all were destroyed in the fire which swept through Watanabe’s workshop on the heels of the great Kanto earthquake. Hiroaki then resumed work for Watanabe and created about 250 more designs for scenery prints and the small greeting cards with which Watanabe rebuilt his export business. Prints of nudes and other subjects were published by Fusui Gabo in the 1930s. According to one report Hiroaki, visiting his daughter in Hiroshima in August 1945, was killed by the atomic bomb.** Taken in whole, or in part, with permission from: Merritt, Helen and Nanako Yamada. Guide to Modern Japanese Woodblock Prints: 1900-1975. University of Hawaii Press: Honolulu. 1992. 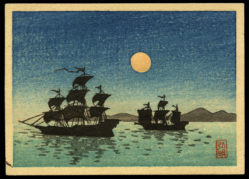 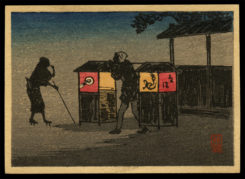 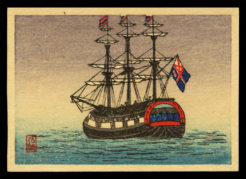 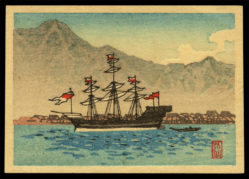