Born in Toyko. Graduated in 1900 from Toyko School of Fine Arts. Studied with Soyama Sachihiko, Horie Masaaki, and Kuroda Seiki. Active in formation of Hakubakai and Kofukai. Exhibited at Bunten and Teiten. Contributed moku-hanga to Kofu, the magazine of Hakubakai. Made book covers and illustrations. A print entitled Woman Tying Paper Fortune (Omikuji o musubu omna) is dated 1905. A mermaid print carved by Yamagishi Kazue and printed by Nishimura Kumakichi in the early 1920s was probably self-published. Also contributed to Complete Collection of Chikamatsu, 1923. Inn at Gion (Gion no yado), 1935, and Tokyo scenes of that period published by Kato Junji. Nakazawa was honored in the 1950s for meritorious service to culture. Sometimes used the first character of his given name in a square or circle as a seal.** Taken in whole, or in part, with permission from: Merritt, Helen and Nanako Yamada. Guide to Modern Japanese Woodblock Prints: 1900-1975. University of Hawaii Press: Honolulu. 1992. 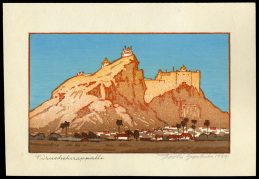 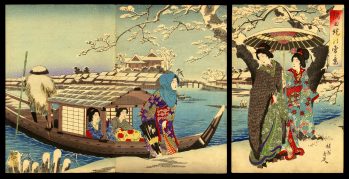 Snow Scene on the Banks of the Sumida River #911401SOLD 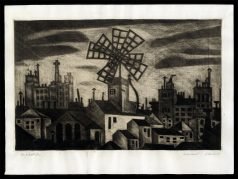