Born in Yokohoma. Graduated in 1916 from Aoyama Gakuin High School. Self-taught as an artist—encouraged by observing in workshop of Goda Kiyoshi (1862-1938) who had studied wood engraving in Europe and practiced the technique in Japan. Lived in Canada, western U.S., and Alaska in 1917-1918. An early print was shown in Second Nihon Sosaku-Hanga Kyokai exhibition in 1920. In 1921 became instructor of English in Tochigi Prefectural Utsunomiya Middle School where he remained until 1942. Printmaking activity began in earnest in 1923 as he strove to preserve his memories of the Meiji heritage largely destroyed in the great Kanto earthquake. He collected old objects and old foreign books, especially those used to teach English to the Japanese, and filled his prints with nostalgic renditions of exotic foreign objects remembered from childhood. Exhibited with Kokuga Sosaku Kyokai in 1924; became member in 1925. Became member of Nihon Sosaku-Hanga Kyokai in 1929; founding member of Nihon Hanga Kyokai. Exhibitied hanga with Shun’yokai and Kokugakai in 1930s. Contributed to Shi to hanga, Dessan, HANGA, Kaze, Han geijutsu, Kasuri, Mura no hanga, Shiro to kuro, and Kitsutsuki. In addition to many single-sheet prints he produced a total of 33 limited edition books by mokuhan including Blue Beard (Aohige), 1927, English Alphabet (Egeresu iroha), 1929, Picture Cards (Toranpu-e), 1939, Lamp, 1940-1941, Southern Barbarian Ship Diary (Nanban Senki), 1942, Slide (Gento), 1943, Careless Bride, (Heppiri Yomego), 1944, Squash Princess (Urihime), 1945-1947, Children’s Silver Cards (Ginmenko), 1950-1952, and Great Cherry Blossoms (Taiju Zakura), 1958-1972. Many of these were hand-printed as well as self-carved. He and his wife evacuated to Hokkaido in 1945 and remained until 1949. Awarded Tochigi prefecture prize for his contribution to culture in 1949. Began to win general recognition in 1960s after Japan Folk Art Society exhibited 200 of his works in 1958. A large memorial retrospective was held at Tochigi Prefectural Art Museum in 1974; another exhibition at the Riccar Art Museum in 1974 or early 1975. Nanbanesque Behavior, 1945, depicting a courtesan and a foreigner smoking long pipes while reclining on a brass bed, is typical of his imaginative and often humorous romantic images of the impact of foreigners on Japan. This, like many of his late works, was printed with a single block in black and colored by hand.** Taken in whole, or in part, with permission from: Merritt, Helen and Nanako Yamada. Guide to Modern Japanese Woodblock Prints: 1900-1975. University of Hawaii Press: Honolulu. 1992. 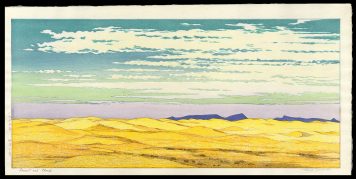