Born in Tokyo. Studied painting with Kawamura Kiyoo and lithography with Kaneko Masajiro. Also learned lithograph technique from his brother, a lithograph technician in Osaka. Active member of Hosun group 1909-1911. In 1916-1917 produced a set of 20 lithographs on Tokyo scenery, Tokyo fukei hangashu, and in 1917-1919 a similar set on Osaka scenery, Osaka fukei hangashu, both exhibited in 1918. Founding member of Nihon Sosaku-Hanga Kyokai in 1918, Yofu Hangakai in 1930, and Nihon Hanga Kyokai in 1931. Evacuated to Toyama prefecture 1945-1949. Known principally as lithographer but also made self-carved, self-printed moku-hanga and in the 1920s designed woodblocks published by Watanabe Shozaburo. Keenly interested in ukiyo-e and published several works on ukiyo-e including Eighteen Studies of Ukiyo-e (Ukiyo-e juhachi ko) and Ukiyo-e and the Art of Illustration (Ukiyo-e to sashi-e geijutsu), 1931. Sometimes signed prints with his given name or first syllable of his given name in hiragana.** Taken in whole, or in part, with permission from: Merritt, Helen and Nanako Yamada. Guide to Modern Japanese Woodblock Prints: 1900-1975. University of Hawaii Press: Honolulu. 1992. 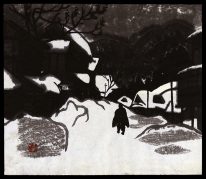