Born in Nihonbashi district of Tokyo. Original name Saito Akira. At age 15 adopted into Torii family as son of Torii Kiyotada (Torii VII) and given the name Genjin (Kotondo). Studied in 1914 with the yamato-e painter Kobori Tomone and in 1918 with Kaburagi Kiyokata. Worked on kabuki posters, billboards, etc., as member of Torii family and produced woodcuts and illustrations for Entertainment Illustrated Magazine (Engei Gaho). Also exhibited paintings of bijin-ga at Inten beginning 1925. Designed most of his moku-hanga in 1927-1933. Published by Sakai-Kawaguchi or Kawaguchi in 1920s and by Ikeda in 1930s. Prints of 1930s carved by Maeda and printed by Komatsu Wasakichi. In 1941, upon father’s death, became Torii VIII and Kiyotada V. Lectured at Nihon University 1966-1972. Made total of 21 bijin-ga prints.** Taken in whole, or in part, with permission from: Merritt, Helen and Nanako Yamada. Guide to Modern Japanese Woodblock Prints: 1900-1975. University of Hawaii Press: Honolulu. 1992. 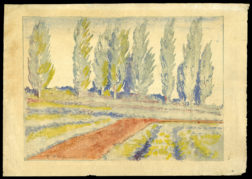 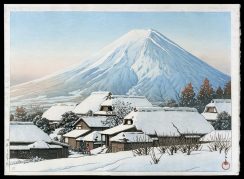