Born in Tokyo. Fourth son of Onchi Tetsuo. Learned calligraphy from his father, tutor of three young princes who were to marry the Emperor Meiji’s daughters. Graduated in 1904 from Bancho primary school; graduated in 1909 from the middle school for German studies in Tokyo. After failing examination to enter Daiichi Kotogakko (First High School), studied oil painting at Aoibashi branch of school of Hakubakai. In December 1909 sent his impressions of the recently published book Yumeji Picture Collection, Spring Volume to the artist, Takehisa Yumeji. Encouraged by Yumeji, Onchi entered Tokyo School of Fine Arts in 1910, studying first oil painting and then sculpture. In 1911 he withdrew from the school and through his friendship with Yumeji obtained job as a book designer with Kawamoto Kamenosuke of Rakuyodo. In 1912 he was readmitted to Tokyo School of Fine Arts. In October 1913, with fellow students Tanaka Kyokichi and Fujimori Shizuo, he began planning the print and poetry magazine Tsukubae; personally created numerous abstract prints and directed publication of 7 issues 1914-1915. Collaborated with Tanaka Kyokichi during the last months of the latter’s terminal illness on illustrations for Howling at the Moon (Tsuki ni hoeru), a book of poems, by Hagiwara Sakutaro; published 1917. In 1916 joined the poets Muroo Saisei and Hagiwara Sakutaro in producing the poetry magazine Kanjo; Onchi contributed cover designs, poems, and moku-hanga. Kanjo continued publication for 32 issues until November 1919. In 1917 Onchi published his first collection of prints, Happiness (Kofuku). In 1919 he participated in the first Nihon Sosaku-Hanga Kyokai exhibition and in 1921 began publication of the general art magazine Naizai with Otsuki Kenji and Fujimori Shizuo. Over the years Onchi was also active in producing and promoting other poetry and print magazines to which he contributed poems, prints, graphic design, and articles promoting the idea that printmaking is a legitimate expressive and creative medium, not merely a means of reproduction. Contributed prints to Minato, Kaze, Shi to hanga, Dessan, HANGA, Shiro to kuro, Han geijutsu, and Kitsutsuki and to numerous collective series. Member of Nihon Sosaku-Hanga Kyokai and founding member of Nihon Hanga Kyokai; a leader and mentor in both associations. Also exhibited prints in Teiten and Kokugakai. By 1927 Onchi had established a reputation as a book designer. In 1928, in the wake of Lindbergh’s trans-atlantic flight, was engaged by a newspaper company to go up in a plane and record his impressions of flight. The resulting book, Sensations of Flight (Hiko kanno), 1934, became a seminal work in book design in Japan. Beginning 1935 he edited for 9 years and 103 issues the monthly magazine Shoso (Window of Writing). This magazine on the art of the book set the standard of excellence for Japanese graphic design. He also personally designed over 1,000 books for publishers creating suitable letters for the cover of each one. Also published several books of his own poems or prose with illustrations, among them Fairy Tale of the Sea (Umi no dowa), 1932, and A Diary of Random Thoughts (Zuiso nikki), 1935. In 1949 received the first prize offered in Japan for book design. In the midst of his busy professional career in 1938 he contributed to One Hundred Views of New Japan (Shin Nihon hyakkei). From 1939 throughout World War II and after, he maintained Ichimokukai, a monthly meeting of hanga artists. Active in progressive art organizations after the war including League of Japanese Artists (Nihon Bijutsuka Renmei), Japan Abstract Art Club (Nihon Abusutorakuto Ato Kurabu), and International Print Association (Kokusai Hanga Kyokai). A major force in the sosaku-hanga movement and the leading abstract print artist of his time in Japan. Sometimes used the signature ONZI on early prints.** Taken in whole, or in part, with permission from: Merritt, 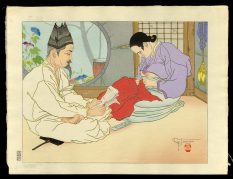