Born in 1907 in Sakamoto, Fukushima prefecture. Moved to Otaru in Hokkaido at age 5; later apprenticed to a sign painter. From an early age operated a successful sign painting business in Otaru. Studied drawing with Narita Gyokusen in Otaru. Infatuated with the art world, he sold his business and moved to Tokyo in about 1932. Studied Western-style painting at Hongo Painting Institute. Exhibited oils with Hakujitsukai, Nikakai, Kokugakai, and Tokokai. Began making hanga by cutting and printing progressively from a single block because he liked the effect achieved by printing. But, like most Western-oriented young artists at that time, he thought he had to be an oil painter to be successful. After exhibiting with Nihon Hanga Kyokai in 1936 and the acceptance of a moku-hanga in the print division of Kokugakai in 1937, he began to think seriously about hanga. At the invitation of Ono Tadashige he joined Zokei Hanga Kyokai in 1938. In the same year he began the Winter in Aizu series, a group of prints of the snow country in which he lived as a child. He first exhibited the Aizu prints in 1942 under wartime conditions in the upstairs gallery of a brush and paper store. Entered employment with Asahi Newspaper Company in 1943. A chance meeting with Onchi Koshiro at the Asahi office led to an invitation to Ichimokukai and membership from 1944 in Nihon Hanga Kyokai. In 1946 or 1947, shortly after the end of the war, he exhibited with Hiratsuka Un’ichi and Kawanishe Hide in a new gallery opposite the Imperial Hotel. At that show he sold his first print. In 1948 he exhibited at the Salon Printemps, an exhibition sponsored by Americans as a benefit for Japanese artists. Became a member of Kokugakai in 1950. In 1951 he received first prize at Sao Paulo for Steady Gaze, 1950. Because the Japanese works for the exhibition arrived late his print was in competition against Japanese oil painting and nihon-ga. This award to a woodblock print in an international exhibition awakened the Japanese art establishment—which had been indifferent if not hostile to hanga—to the respect which modern prints enjoyed abroad. Saito also won a major prize at the international competition in Ljubljana in 1956. Visited the U.S. in 1956 under auspices of the State Department and Asia Foundation; from that time exhibited widely throughout U.S. and Europe and made a living from prints. Attracted to the use of wood grain in the work of Gauguin and Munch in the 1940s. In 1954 on a visit to Katsura palace in Kyoto he discovered the orderly beauty of architecture and compared it to the intellectual organization he had seen in Mondrian paintings. This led him to search for the essentials of nature and express them in flat areas of color and texture in bold and graceful designs. His prints are especially appreciated abroad.** Taken in whole, or in part, with permission from: Merritt, Helen and Nanako Yamada. Guide to Modern Japanese Woodblock Prints: 1900-1975. University of Hawaii Press: Honolulu. 1992. 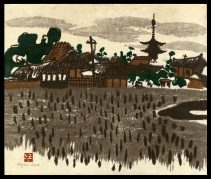