Go: Sharaku, Toshusai. Ukiyo-e printmaker and protégé of the leading publisher Tsutaya Juzaburo. Nothing known about him save he lived in Edo. Has been identified by some scholars with Saito Jurobei, a No actor in the employ of the lord of Awa, but there is no concrete proof of this. Specialized in portraits of actors, usually large-scale okubi-e, frequently on a mica ground, done with a sharp, biting, satirical wit. All his prints (some 159 are known) were done in ten months in 1794-95 and are unique in the annals of Japanese art. Although Sharaku’s genius is universally recognized today, in his own time the new element of sharp realism and psychological caricature in his art was hardly appreciated by the Edo populace, which doubtless accounts for his short career. Sharaku’s earliest prints (the large actor portraits) were among the greatest and most original; they show an individuality of expression and depth of psychological probing hitherto unknown in ukiyo-e. In dynamic group composition Sharaku also excelled; in his panels of single standing figures, however, he reveals his basic debt to the school of Shunsho and fails to find the opportunity to wield his incisive brush either in creative character portrayal or sinuous theatrical composition. For so stunning an artist, it is curious that so little information about him is available. Taken in whole, or in part, with permission from: Merritt, Helen and Nanako Yamada. Guide to Modern Japanese Woodblock Prints: 1900-1975. University of Hawaii Press: Honolulu. 1992. 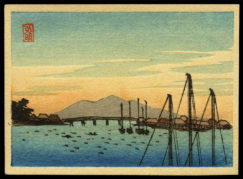