Born in Tokyo. Given name Yoshinosuke. As a young man looked up to Hirafuku Hyakusui, 11 years his senior. Studied Japanese-style painting with Kubota Beisen and in 1906 exhibited at Inten. Studied at Tokyo School of Fine Arts. Beginning 1908 worked for some time as illustrator for Asahi shinbun. Became associate member of Saiko Nihon Bijutsuin in 1918. Withdrew from Japanese-style painting in 1919 and turned his attention to theatrical subjects; became secretary of the Theatrical Painters Association of Japan (Nihon Gekiga Kyokai). Became a member of Museikai. A few actor prints were published by Watanabe Shozaburo beginning in 1916 including Ganjiro in the Role of Kamiya Jihei, 1916, and Baiko in the Role of Otomi, 1917. After a lapse of several years Watanabe published a series of 36 actor prints, Portraits of Actors in Various Roles, 1925-1929, one print designed for each month. This series was shown at the first Toledo Museum exhibition in 1930. It was augmented by 15 additional prints, Shunsen’s Portrait Collection (Shunsen nigao shu); 5 of which were shown at the second Toledo Museum exhibition in 1936. The total issue of 51 prints extended into 1931. On the actor prints Shunsen used a variety of seals including a leaf, dual seals reading Shun and Sen, and single seals reading Shunsen, Natori, Shun, Kachicho, Kachicho Tei, Kachicho Sai-in, Shinkai, and Taishido. Watanabe also published 3 bijin-ga by Shunsen 1925-1930 and another series of 30 prints entitled Portraits of Contemporary Actors in Kabuki Plays. Prints of dancers were published by Kato Junji. Late in life Shunsen and his wife committed suicide by poison.** Taken in whole, or in part, with permission from: Merritt, Helen and Nanako Yamada. Guide to Modern Japanese Woodblock Prints: 1900-1975. University of Hawaii Press: Honolulu. 1992. 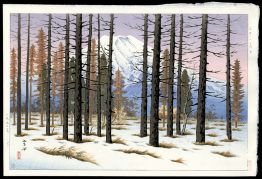