N.: Utagawa (originally Kurahashi) Toyokuni. F.N.: Kumaemon, Kumakichi. Go: Ichiyosai. Ukiyo-e painter, printmaker. Lived and worked in Edo. Son of a sculptor of puppets. Pupil of Utagawa Toyoharu. Influenced by almost every well-known contemporary print artist: a thorough eclectic, but with a number of personal mannerisms. His most typical work consisted of actor prints in which he showed the actors both in their stage roles and in private life. Also illustrated books by Santo Kyoden and other writers. Most prominent and popular member of the Utagawa school, but his work uneven and, about 1805, began to show a marked and rapid decline. Said to have been the originator of azuma nishiki-e. At his best, a brilliant draftsman and designer. Had many followers. Taken in whole, or in part from: Roberts, Laurance P. A Dictionary of Japanese Artists: Painting, Sculpture, Ceramics, Prints, Lacquer. Weatherhill, Inc: New York. 1986. 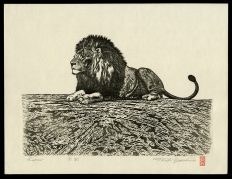