Born in Shinagawa section of Tokyo. Given name Yoshitaka; used the art name Koka for paintings, Toyonari generally for prints, although also occasionally Koka. Studied with Ogata Gekko. Graduated in 1907 from Tokyo School of Fine Arts in Japanese-style painting. Exhibited a painting at the first Bunten, 1907; also exhibited at Inten and with Ugokai. Member of Saiko Nihon Bijutsuin from 1916. In 1916 Watanabe Shozaburo saw painting of an actor at Inten and asked to make a print from it; followed this with a series of 12 okubi-e actor prints in 1920-1922. Other woodblocks including Pelicans, Jar of Dahlias, and Parrot, all 1924, were published by Watanabe. Also made lithographs. The series of actors and bird and flower woodblocks were shown at the Toledo Museum exhibition in 1930. Among the about 30 woodblocks Toyonari made during his lifetime, Shanghai Café Dancers, self-published in 1924, has a uniquely “roaring twenties” spirit.** Taken in whole, or in part, with permission from: Merritt, Helen and Nanako Yamada. Guide to Modern Japanese Woodblock Prints: 1900-1975. University of Hawaii Press: Honolulu. 1992. 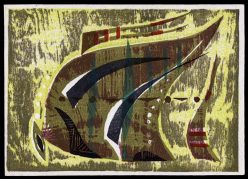 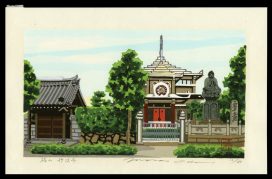