Born in Kurume, Fukuoka prefecture. Original name Ueda Hiroshi. Studied with Yoshida Kasaburo, his adoptive father. Also studied with Tamura Soritsu in Kyoto in 1893; went to Tokyo in 1894 to study with Koyama Shotaro at Fudosha. In 1899 traveled in the U.S. with Nakagawa Hachiro; exhibited paintings in New York, Boston, and elsewhere. Founding member of Taiheiyogakai in 1902. Traveled to Europe 1903-1905. In 1907 he married Fujio, third daughter of the Yoshida family into which he had been adopted. He was a well-established landscape painter, exhibiting at Bunten and Teiten, before he began printmaking, and he continued to exhibit paintings throughout his career. During his travels, however, he learned of the West’s admiration for Japanese prints and in 1920 made his first print, The Secluded Garden of Meiji Shrine, with Watanabe Shozaburo. This was one of a total of 7 prints made with Watanabe before the 1923 earthquake; the blocks of all were destroyed in the fires following the quake. Hiroshi and Fujio traveled in the U.S. and Europe 1923-1925 painting and selling their paintings. Enthusiasm for his prints during this sojourn abroad persuaded him to establish his own print workshop upon return to Japan in 1925. Specialized in landscapes from his travels abroad and in Japan. Yoshida learned the skills of carver and printer and often carved his own blocks and personally supervised every stage of his prints. Most of his extensive production was sold abroad; he did not exhibit woodblock prints at Bunten until 1937. Served as a war correspondent in Manchuria in 1938 and 1940; produced his last print in 1946. The characters “JIZURI” (self-printed) are found in the margin of prints made during his lifetime and under his close supervision.** Taken in whole, or in part, with permission from: Merritt, Helen and Nanako Yamada. Guide to Modern Japanese Woodblock Prints: 1900-1975. University of Hawaii Press: Honolulu. 1992. 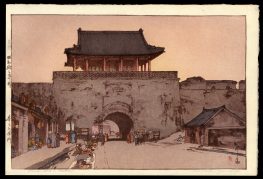